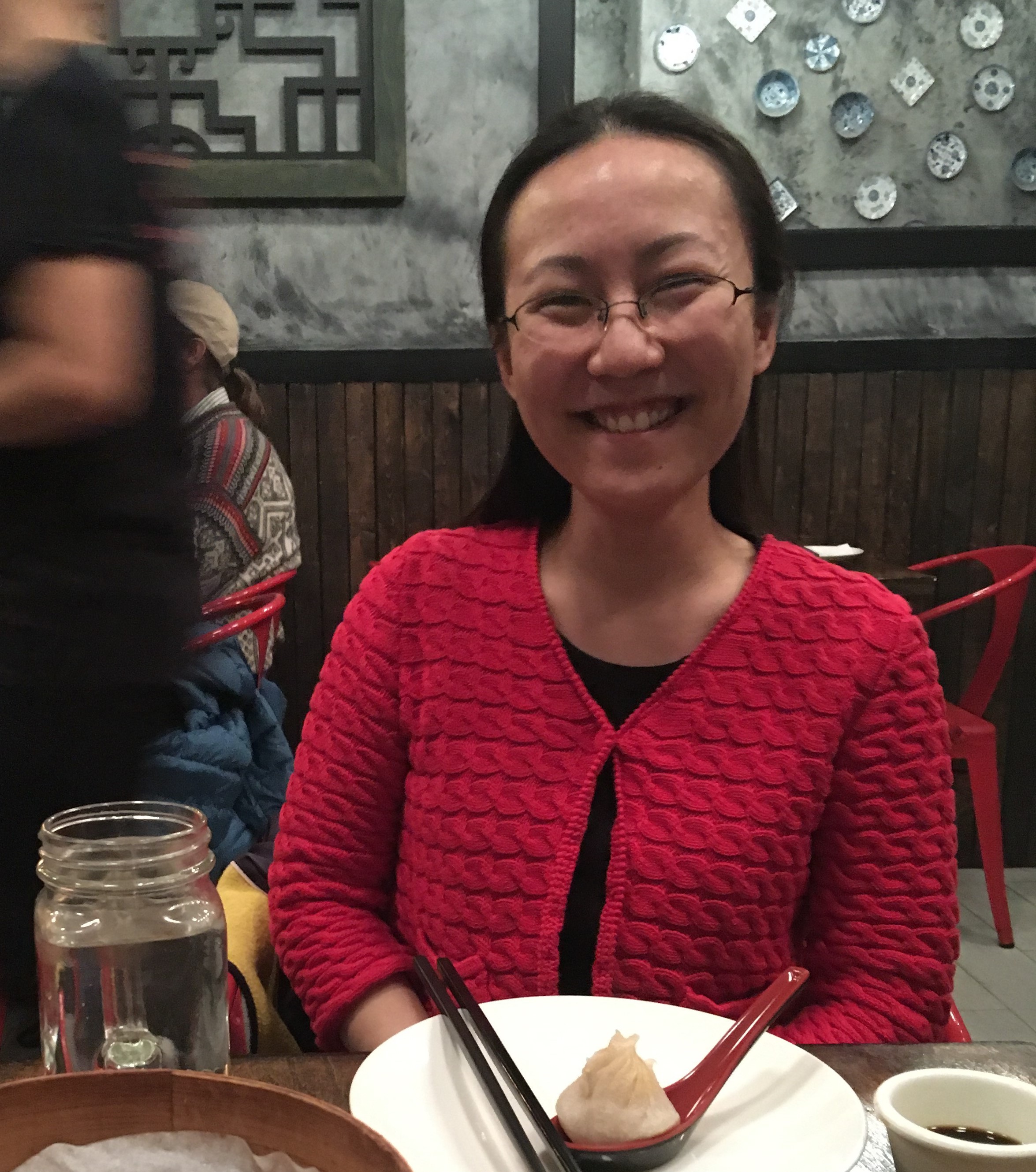 Below outlines my motivated iteration between developing new statistical methodologies and applying them to make interesting scientific observations. 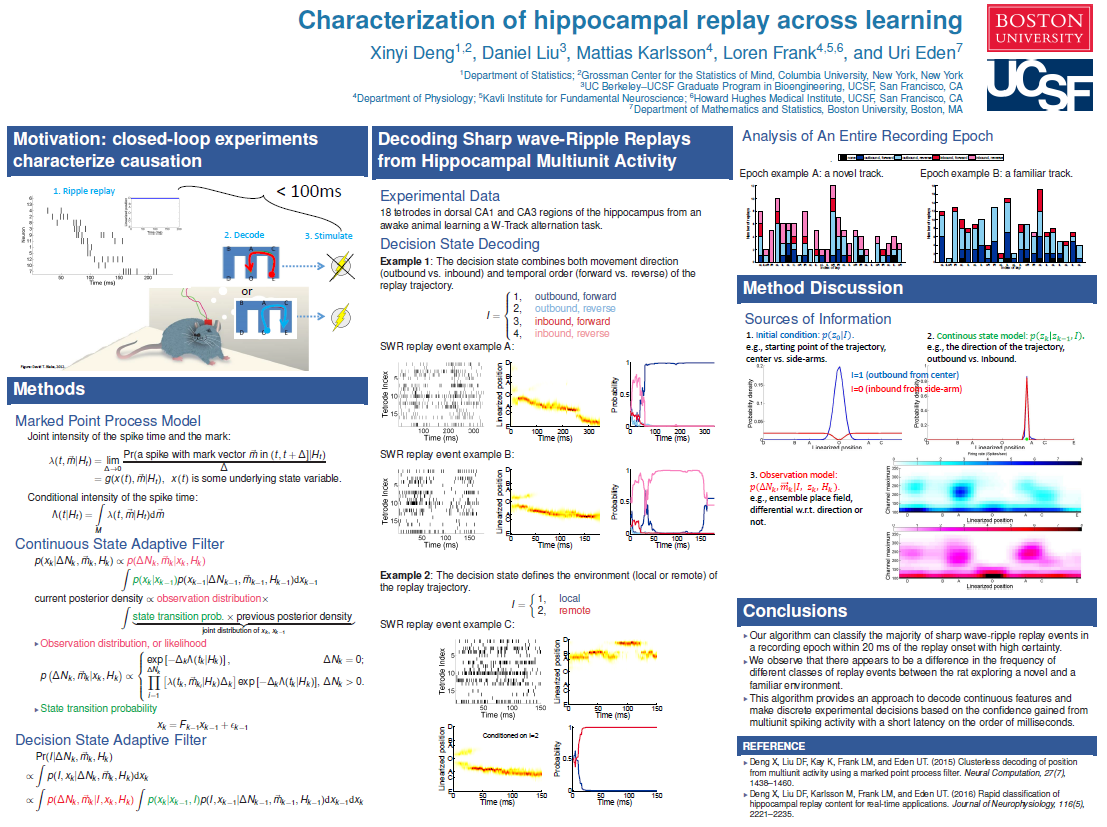 Decoding algorithms have been developed to study how firing patterns of neural systems maintain dynamic representations of relevant stimuli. In each of these cases, a key assumption is that the signals have been accurately sorted into single units before the decoding algorithm is applied. Although new spike-sorting algorithms are being developed, spike sorting remains a time-consuming, difficult task; requires significant expertise and long training; suffers from many sources of errors; and likely provides biased estimates. A continuing theme from the end of my graduate research into my postdoctoral work is clusterless decoding methods, which maintain the accuracy of previous methods, but avoid the clustering problem of spike sorting entirely.

Deficits in cognitive flexibility have been linked to autism, obsessive-compulsive disorders and schizophrenia. Investigations of these deficits have led to new multi-faceted experimental design and have generated behavioral data with growing complexity. In addition, technological advances now allow for recording of large quantities of information from the brain at multiple spatial and temporal scales, includes multi-channel electrode arrays, EEG, MEG and fMRI. Access to this type of high-dimensional data, both behavioral and neural, has also presented a challenge for statistical data analysis and modeling: What is an adequate representation of the relation between features of the behavioral task and structures in the neural activity? 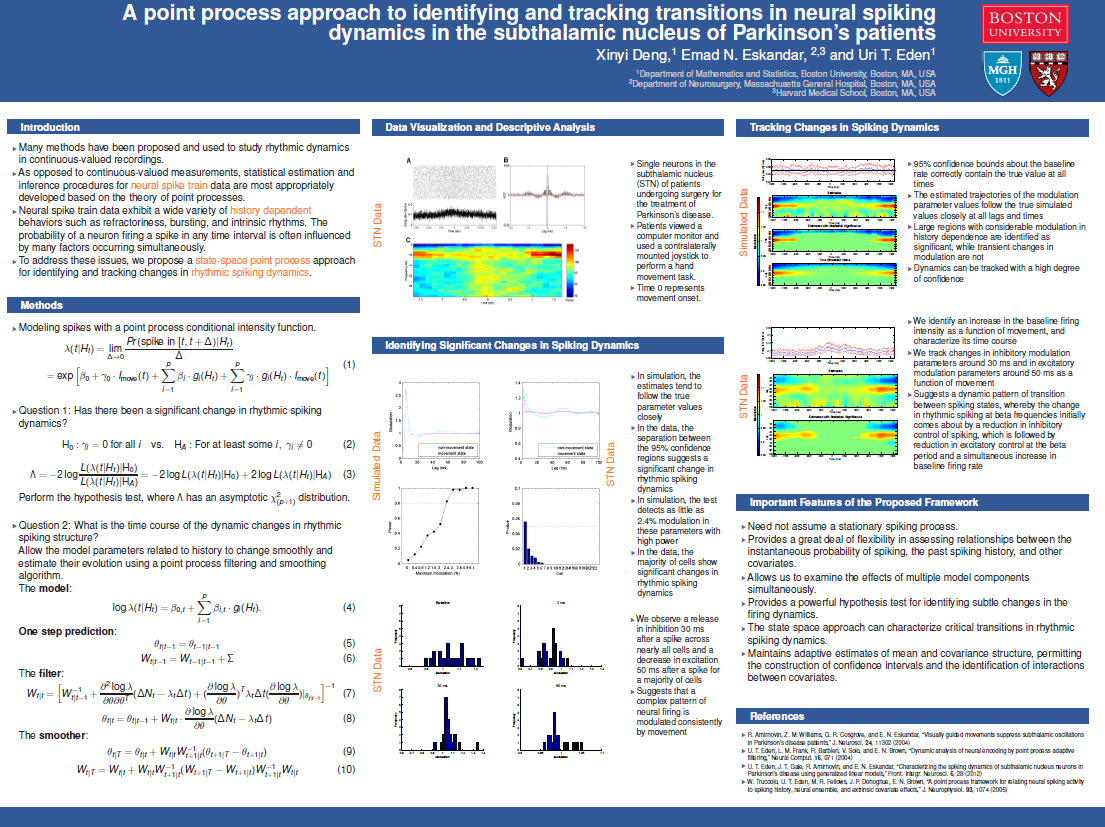 Deep brain stimulation (DBS) is a highly promising therapy for Parkinson’s disease. Yet most patients do not get full therapeutic benefit from DBS due to its critical dependence on electrode location in the sub-thalamic nucleus (STN) for therapeutic efficacy. Previously, many methods have been proposed and used to study rhythmic dynamics in continuous-valued recordings such as EEG and LFP, but methods suitable for the discrete, single unit spiking activity that are typically recorded from STN neurons in Parkinson’s disease patients are needed to address a number of critical statistical challenges.

Statistics can be a catalyst for scientific insights 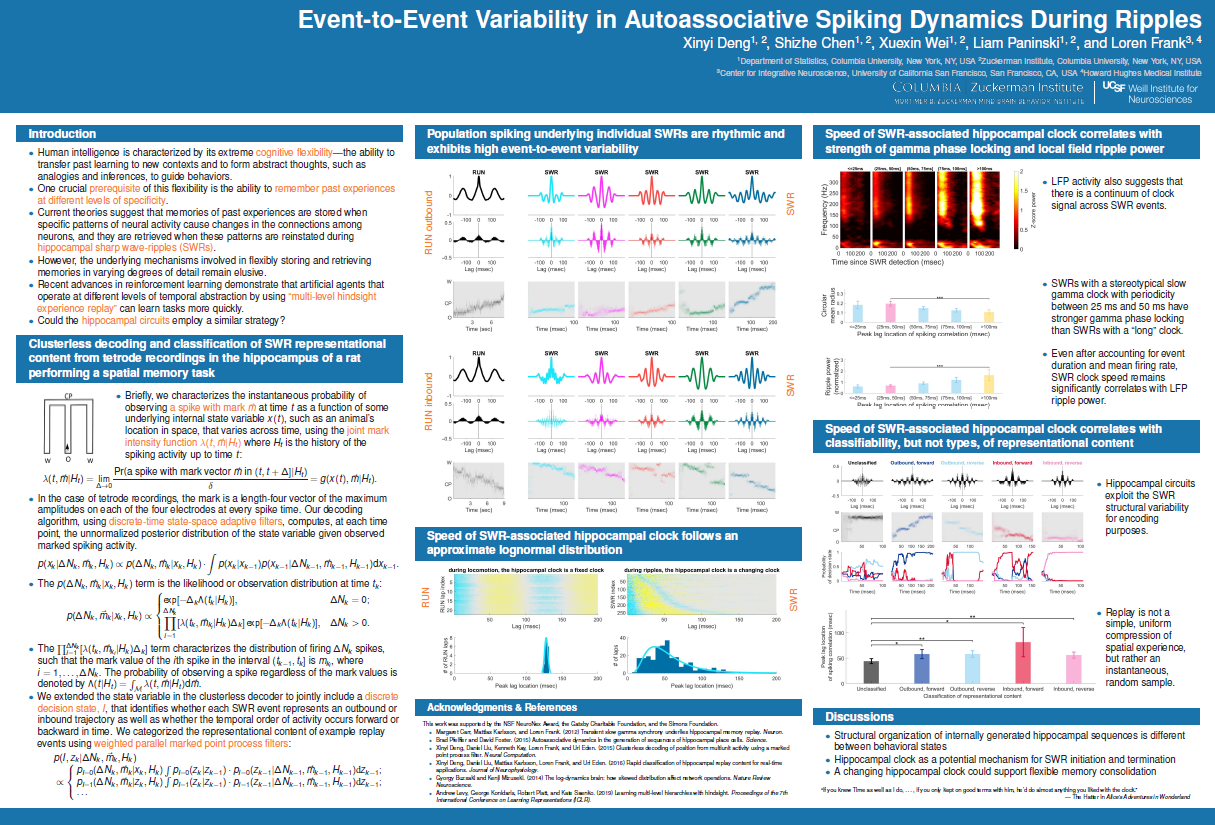 The ability to flexibly remember experiences at different levels of specificity is crucial to how we learn and how we make decisions. However, the underlying mechanisms involved in flexibly storing and retrieving memories in varying degrees of detail remain elusive. Current theories suggest that memories of past experiences are stored when specific patterns of neural activity cause changes in the connections among neurons, and they are retrieved when these patterns are reinstated. For example, when an animal moves through its environment, spiking activity of hippocampal place cells is paced by an underlying “clock” with a constant rate at theta frequency. When the animal slows down or pauses, place cell population is sequentially reactivated during sharp wave-ripples (SWRs), which often represents a replay of past trajectory on a compressed time scale. Is the hippocampal clock also constant during the SWR state?